I wrote this a few years ago for Standard Issue magazine. It includes a short tribute to Lauren Laverne. Seems appropriate to share again now.

History is scattered with times and places when we know it was great to be alive: les Années Folles on Paris’ Left Bank in the 1920s; the Beat Generation in Greenwich Village NYC in the early 50s; and, of course, Britpop in Camden in the 1990s. I am not currently in possession of a time machine, but close your eyes and put on your listening ears, I suspect the music can take us back to the mid 90s. Lets bypass Damon, Noel, Alex, Brett, Liam etc. and rediscover seven female wonders of Britpop.

This list is in no particular order, however, it would be easy to argue that Justine Frischmann was the sun around which all Britpop revolved, the axle that kept the Britpop  spokes in place, the keystone of the Britpop bridge. Yes, I am exaggerating for very little effect but Frischmann did have her fingers in many Britpop pies.

Having been a member of Suede before Elastica and been the significant other of both Brett Anderson and Damon Albarn, she has not only written great songs but has had great songs written about her; most notably, Blur’s 1999 album 13. Listen to the lyrics of Tender or No Distance Left to Run. These are not just “break up” songs, they are “complete dismantling and selling of your innermost parts for salvage on Gumtree” songs. For example, “I won’t kill myself, trying to stay in your life, I got no distance left to run.” Ouch!

Anyway, you can interpret Elastica’s Waking Up as a reflection on the difficulties encountered as a creative artist in a society of rules and routine. Or, you can just agree that waking up and getting up has never been easy, and that is a lovely guitar riff. I mean, I could stay in bed all day listening to this.

Is this a feminist anthem, or is it just a song about getting hit on in clubs? We can debate this later but “Save your breath for someone else and credit me with something more” is definitely more empowering than the girl power message released later in the same year: “Slam your body down and zigazig ah.”  I personally guarantee that your day will be a much better one with this tune trapped inside your head (see also 500 on the same album).

Only Happy When it Rains – Garbage

From a possible feminist anthem to an indisputable feminist icon. Shirley Manson’s voice on its own is a wonder of Britpop. Fittingly, you’ll find the sound of Garbage down a grungy alleyway a short distance from the poppy Britpop High Street. Many of these female fronted bands sound grittier and more determined than bands like Blur, Cast, Shed Seven, Pulp. So it starts to feel like Britpop was much more than what its name suggests. In fact, this song could be an entry level hymn for an apprentice goth.

Shirley was back in the news recently for giving Kanye West a deserved written clip round the ear. It’s fine, it didn’t kill him, so it’s probably made him stronger.

At the bottom of Garbage’s grungy alleyway, take a right and keep going. You’ll eventually reach the synthpop end of the Britpop spectrum and Republica should be hanging around there by the synthesizers. Maybe I’m stretching the Britpop category too far for your liking, but this song needed to be here to give us all a good kick up the arse. Despite being first released in 1996 you’ll still hear this on TV ads and it has been everywhere from Beverly Hills 90210 to George at Asda. Listen to the entire 1996 Republica album, it’s an incredible collection of sounds.

What do I do Now? – Sleeper

I had the lyrics to this song written inside my biology folder. At the time it felt like my manifesto. I often danced round my room to the sound of my corduroy flares and I dreamed of walking to a nearby pub and watching a couple of bands. The problem was I lived in a small town in Northern Ireland, not Camden. There were no nearby bars with bands. So my corduroy flares and I spent most of our time in my room listening to cassingles and reading Select magazine. However, there was hope, day release for the flares. Every Wednesday in the summer months the local club opened up a small, upstairs room to play guitar music. Sometimes you just want to hear the music you like played loud in the company of people you like. And so we took our corduroy flares and our cardigans and threw beer all over our suede converse like we were young people who just didn’t care. Because we were. Listening back to these songs, I am convinced I am still that age. Although it is perhaps a sign of adulthood that I now Scotchguard my suede Converse.

Echobelly’s On is one of my favourite albums of all time. If you had to catalog Sonya Madan, you’d probably file her under “cute indie” but don’t be fooled. This album dives into subjects like homelessness, life after death and prostitution. Yet it also soars into this uplifting chunk of pop that you must turn up loud and vent your lungs to. This song oozes optimism, who doesn’t want to do great things? “What is life apart from memories or dreams and friendships we have known?” It is probably the positiveness of this track that drew Morrissey to become such an Echobelly fan.

In the days of Britpop, it felt like new bands were appearing every day. Luckily we had Top of the Pops and Woolworths to keep our ears up to date. These two institutions saw us through Britpop and off into post-Britpop. They carried us over the post-punk revival before they were cruelly taken away in the early 2000s, leaving us drifting aimlessly on the second wave of Britpop. Lost at sea with no idea where to turn our ears in the ocean of new sounds. Then, on the horizon, a lighthouse to guide us. That lighthouse is the luminary of listening that is Lauren Laverne. She’d been there from the start, in Kenickie. She is the past, the present and the future of what we put in our ears. If Lauren is a punka, then I want to be a punka too.

I hope you’ve enjoyed this trip back to the 1990s. There were only seven spaces on this list so no room to mention others in and around Britpop including: Cerys Matthews, Catatonia; Sarah Blackwood, Dubstar; Charlotte Hatherley, Ash; Manda Rin, Bis; Candida Doyle, Pulp. In August it will be 20 years since the infamous Oasis v Blur battle for number one. Lets not dwell on that fact.  Please add your stories and comments below so I can continue reminiscing because at the End of a Century nobody met up in the year 2000, maybe we think we’ll Live Forever.

Back on BBC Scotland’s Breaking the News this week. On BBC Radio Scotland 1.30pm Friday and 11.30am Saturday. Also on iPlayer shortly after, listen here and podcast available here 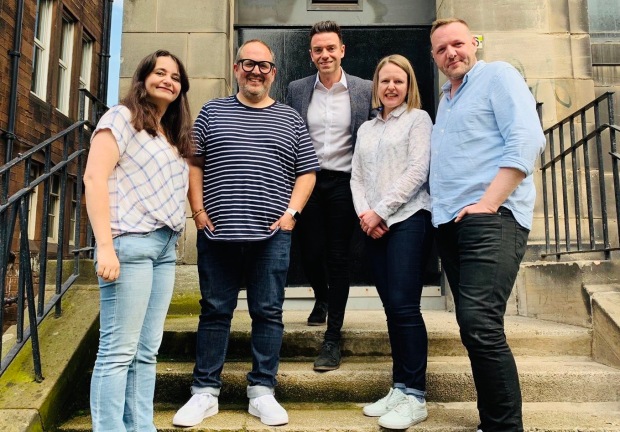